Lilith, the consort of the Unnamed One, has released the Damned, tortured souls from all levels of Hell, to walk the streets as the living dead. A dark chaos leaks onto Earth, taking the form of a deadly contagion that not even the Neteru team can handle. One touch from these deadly creatures infects a human, driving him to madness, death…and worse.

This time, Damali Richards, the Vampire Huntress (aka the millennium Neteru), Carlos, and the Guardians cannot effectively close ranks. The infection spreads to key team members and threatens to wipe out the entire squad. Even the Covenant is infected. They must track down the Chairman before members of the Neteru-Guardian team are lost and the team implodes. The only antidote is to behead Lilith. But first they must find her.

I am such a huge fan of L.A. Banks and all of her books, her writing is amazing. She creates such an amazingly dark paranormal world. ‘The Damned’ is the sixth book in the Vampire Huntress Legend novels and I am hooked. Carlos and Damali are such fierce characters that have been to hell and back, literally, in these books and yet somehow in the sixth installment the story is still fresh and entertaining.


I just think the details and descriptions in this book were phenomenal, I can clearly see everything in my head that she writes. This book really threw all her characters for a loop and I really think that’s a huge part of what keeps it so interesting. This is a series that you want to take the time out to read.


It’s a great book and she is definitely one of my favorite authors and has been for a long time. She never disappoints!

* I bought this book of my own accord and decided to review it. All opinions expressed in this review are my own. I did not receive compensation for this review.
Posted by Chasity Tarantino at 9:04 AM No comments: 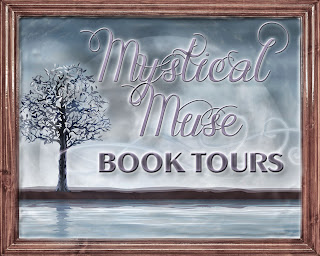 I am so pleased to be a part of this amazing release day!!!! What a wonderful book this is and you should all go and get it right now. Stay tuned for my review on October 10!! 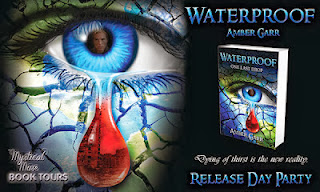 It's September 24th and that means that Waterproof has finally arrived!

Buy Now at Amazon or Smashwords 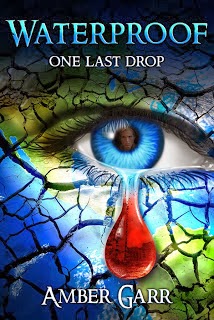 Dying of thirst is the new reality.

Five years after the last drop of clean water disappeared, global societies collapsed and nuclear war shattered all hope of recovery. In a place now only a skeleton of its former self, survivors fight to avoid capture by the government. Forced to work in factories that produce the only drinking water available, those who go in, never come out.

Zach and Vivienne have lived as deserters since they were teenagers. Fighting amongst their own and scrounging for the necessities of life, they’ve learned to rely on each other in every way. Yet when tragedy strikes and the true objectives of the government facility are revealed, their world is ripped apart.

A fate once thought to hold their demise may be the sole answer to their survival. Who can they trust? Who can they believe?


In this life, it pays to be waterproof.

Amber Garr spends her days as a scientist and nights writing about other worlds. Born in Pennsylvania, she lives in Maryland with her husband and their furry kids. Her childhood imaginary friend was a witch, Halloween is sacred, and she is certain that she has a supernatural sense of smell. Amber is a multiple Royal Palm Literary Award winner, author of Waterproof,  The Syrenka Series, The Leila Marx Novels, and the upcoming Death Warden Series. When not obsessing over the unknown, she can be found dancing, reading, or enjoying a good movie.


Excerpt From the Book


My legs ached with every jarring move, growing heavier the closer I got to my destination. The weight of my bounty pulled against me like a prisoner’s chain. If I dropped it, I would be safe. The idea taunted me as I ran through the abandoned junk yard, dodging large pieces of scrap metal and sliding over the rusty hoods of skeletal cars.


“Drop them or I’ll shoot you dead,” a gruff voice yelled behind me.


I didn’t dare turn back. Something whizzed past my ear and slammed into the side of an old van blocking the path in front of me. A reddish dust full of steel splinters exploded in my face as the unmistakable sound of tearing metal pierced the dusk air. I’d gravely misjudged this group of deserters.


Heart hammering in my chest, I slid to a stop before crashing into the bullet hole meant for my head. Two bottles slipped from my arms and rolled underneath the van before I could stop them. Shit. There wasn’t enough time but I couldn’t go back with only those left in my hands.


I braved a look behind at my pursuers. The three men tearing after me had nothing but revenge in their eyes. If the two sawed-off shotguns didn’t represent their intentions, then the man firing the military rifle at my head made it very clear.


Another bullet slammed into the van just as I ducked down to retrieve the bottles. Footsteps pounded against the broken pavement and dead leaves, sounding more like an army than a handful of survivors like me. I reached as far as my shoulder would allow, ignoring the pain searing through my tired muscles. My fingertips brushed the plastic container just before it rolled further under the van.


“Where’d he go?” one of the men called out. He sounded close.


Dropping to my stomach, I nestled the remaining bottles under my left arm, while trying to retrieve the others with my right. After squeezing half my body underneath the van, I finally grabbed the first, then the second. Another shot ricocheted off the ground in front of me. They were trying to flush out my position and if they found me now, I was dead.


Scooping up the prized possessions I’d risked my life for, I prepared to run. Trapped between two vehicles, only one option presented itself - I’d have to get to the old cargo containers. This particular group of deserters set up their camp inside a metal scrap yard. Smart and resourceful. The dilapidated containers had been pushed to the sides, creating a barrier and providing some semblance of safety. Although I’d slipped through them easily on my way in, my arms were now full of water bottles that slowed me down.


Water. Wars were fought and lost over it. People died. Billions of humans perished in the days leading up to the end. And now I risked my life for a mere eight liters because we’d used the last natural drop of clean water on the planet five years ago.


Metal cracked above my head. Dust fell into my eyes and tiny pellets showered over my back like a swarm of bees.


I looked up in fear, only to see that I still had a clear path to my escape. Shotgun man had his sights somewhere else. Now was my chance.


Sucking in a deep breath, I scrambled to my feet and ran as hard as I could toward the narrow crevice between the containers. Forcing myself not to turn and look where they were, I ignored the shouting and distinct sound of shells hitting the ground. 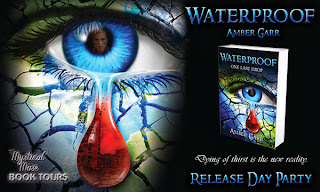