End As An Assassin by Lex Lander

End As An Assassin
Lex Lander 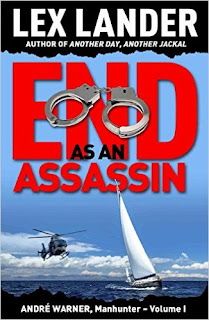 André Warner is a professional killer, ex-British Secret Service. Thirty-nine contracts have made him a wealthy man, and his fortieth is to be his last.

The hit goes smoothly enough, and the victim – a degenerate drug baron – is dispatched with minimal fuss and no traces left to incriminate Warner. He drives off into the sunrise to hang up his gun and retire to his home in Geneva.

Then into his life comes Gina, a hauntingly beautiful divorcee, fugitive from a bad marriage. The timing is perfect, coinciding as it does with Warner’s new beginning. They soon become lovers, and all seems set fair for a life together.

Their idyll is shattered when a former associate turns against Warner, and he faces exposure and arrest. Accompanied by Gina, he flees his Geneva home, only to run from the clutches of the Swiss police into the far deadlier embrace of a Marseilles crime syndicate whose boss has a score to settle on behalf of Warner’s last victim. Suddenly Gina is at risk through her association with him, and in trying to protect her he only makes matters worse.

His retirement plans in shreds, his life on the line, Warner is forced to stage a comeback. Only this time it’s not for money. It’s for blood, pure and simple.

My Thoughts
This book was a quick read, had a very interesting plot. Lex Lander wrote some very intriguing characters, and I really enjoyed reading about them and being apart of their adventure. 'End As An Assassin' was an action packed, adrenaline filled, adventure.
I would have liked to see a bit more clarity and brevity in some parts because I felt like it was too jumpy in some part.
Other than that it was a very enjoyable read and I felt like I was right there with the characters in the heat of the action.
I'm interested to see what else Lex Lander has to offer.

* I received this book in exchange for an honest review. All opinions expressed in this review are my own. I did not receive compensation for this review.
﻿
Posted by Chasity Tarantino at 8:40 AM No comments:

'To My Loves' by Jen Cousineau Book Review 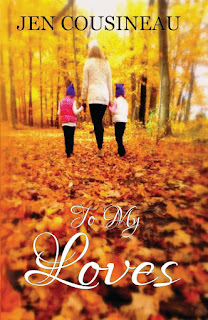 
Peyton and Colton grew up not only as brother and sister, but as thick as thieves. After the sudden death of their parents, Colton decides to enroll in the Marines, bringing Peyton along for the ride. While Colton falls for the love of his life, Peyton settles for a man who she has fun with.

But when Colton receives his orders for deployment, he leaves Peyton to take his place next to his newly pregnant wife Julia until he returns.

When double tragedy strikes, Peyton barely manages to hold on to her own life, struggling to make sense of everything happening around her. With her grip slowly slipping, the third tragedy hits when her doctor tells her that it might be time for her to let go.

Will the news from her doctor finally set her free and allow her to truly live? Or will the verdict only cause her to give up completely?

Let me begin this review by saying you better grab a box of tissues before you begin this book, because you are going to need them. ‘To My Loves’ is one of the most beautiful stories I have ever read. Peyton is such a strong, brave, beautiful woman and a character I am sure many people will look up to and relate to. She has been dealt one hell of a hand in life, but she deals with it in such a heroic way. Life just keeps trying to push Peyton over but she tackles everything life throws at her, fighting fire with fire.


Jen Cousineau’s writing is beautiful, emotional, motivational, and powerful. I couldn’t put it down. ‘To My Loves’ made me cry, laugh, and learn so much about my own life that I could never even begin to express my gratitude for. I thought Jen’s characters were strong, relatable and captivating.


The plot line was immediately addictive and pulled me in. ‘To My Loves’ was a brilliant, captivating, emotional masterpiece that pulled at the heart strings and upped the stakes on plot twists. I cannot wait to read more from Jen Cousineau.

* I received this book in exchange for an honest review. All opinions expressed in this review are my own. I did not receive compensation for this review.
Posted by Chasity Tarantino at 7:19 AM No comments: